Home » Voice of the Woman: A Doubtful Christmas

A DOUTBFUL CHRISTMAS
The value of hard work, love and commitment

During the summer of 1944, my father sold everything we owned, took all the money and disappeared from our lives. My mother suddenly found herself alone to care for five boys. I was the oldest, barely ten years old. My youngest brother still wore diapers.

My grandparents welcomed us to their place – eighty acres of rocky hill country, twenty miles from the nearest town. They scratched a living out of growing row crops in the thin topsoil, and running beef cattle on open range.

Grandpa butchered an extra hog that year, and we planted a field of turnips to mature in the cool fall weather. We didn’t know a lot of different ways to prepare turnips, but the farm supplied adequate food. My mother worked in the fields and cared for us kids while I started fifth grade at school.

Changes in our lives couldn’t be avoided. My father had been abusive at times, but he’d always provided for us. Now, I worried about what might happen, but my mother stayed positive, and assured us that she would keep us together as a family and safe from harm.

Relatives donated hand-me-down clothes whenever they could, and the farm produced enough food to nourish all of us every day. I milked cows before catching the school bus, and did chores after I got home each day. The younger boys washed dishes, fed chickens and pigs, and carried in firewood. Six-year-old Jerry was paired with me on a crosscut saw, and we regularly cut wood to heat the house during the winter.

Our efforts paled in comparison to what our mother did, however. At one hundred-five pounds, she could swing an axe, manhandle heavy horse-drawn plows, haul hay for the cattle, and harvest crops. Still, she found time to help us with homework and say prayers with the younger boys. She also made sure we attended church regularly, and taught us to appreciate music.

As Christmas approached, my mother didn’t seem to smile as much. She hinted that Santa might have trouble bringing us presents this year. I considered myself practically grown, so I hid my disappointment, but when I overheard a conversation between my mother and grandma, I really started to worry.

“I can’t afford to buy Christmas presents for the kids,” my mother said.

“You need to have something for them,” grandma replied. “Maybe you could wrap some of the hand-me-downs.”

“The kids would be terribly disappointed to find old clothes under the tree. I have to do better than that. Maybe I can make toys.”

Homemade toys didn’t excite me, but I realized she had no money to buy presents. Explaining that to the younger kids might be difficult, though.

One day, my mother took a saw into the forest and returned with a stack of tree limbs. She left them in the harness room in the barn and refused to tell her curious children what they were for.

She worked on her project while I was in school, but I peeked when I had a chance. Pieces of wood had been cut into different shapes, then planed and sanded smooth. Later I found a stack of discs cut from a round oak limb. She also had started to carve a long piece of hickory, but I couldn’t figure out its purpose.

She hid everything from us and frustrated my attempts to snoop. But I saw that she had used nails, glue, and paint from grandpa’s workshop. I concluded that she had to be making presents

By Christmas week, my mother was her normal happy self again. Her project was apparently complete, and she evidently kept it secret because I’d looked everywhere without success.

When school let out for the holiday, my brothers and I cut a Christmas tree in the forest and dragged it home through the early snow. The whole family helped decorate it with ornaments, pinecones, and strings of popcorn. We gathered mistletoe and holly boughs and hung them throughout the house.

While my mother and grandma prepared food for Christmas dinner, I helped grandpa with chores. The younger kids kept a diligent watch on pastries in the cupboard.

On Christmas Eve, we sang carols, and grandpa read aloud from his Bible. After my mother shooed us off to bed, I lay awake for a long while, anticipating Christmas morning. Aunts, uncles, and cousins would come for dinner, and I was curious about what my mother’s project would yield. I doubted that it could be anything elaborate, and homemade toys still didn’t sound exciting, but I couldn’t help noticing that she’d made a huge effort to provide for us.

I was already awake when she tapped on our door. “Merry Christmas, boys.”

We hurried into the living room, and saw that a stack of packages had magically appeared overnight under the tree. But before we were allowed to investigate what Santa had brought, my mother herded us into the kitchen for breakfast.

We gathered around the tree a little later, and my mother handed out the presents. My brothers opened packages stuffed with brightly colored trucks, tractors and trains. Those odd pieces of wood she had handled in secret were assembled and painted to form toys. The round discs made wheels that rolled, and the trucks and trains carried tiny logs and blocks. A tractor pulled a miniature wagon. The toys were beautifully crafted, and my siblings were thrilled.

When I tore off the newspaper wrapping my present, I found a hand carved bow and a quiver of blunt arrows. Blunt was fine, because I knew how to make them suitable for hunting rabbits by forging steel arrowheads in grandpa’s shop.

Many difficult years would follow that particular Christmas, but I never again doubted my mother’s ability to care for us. That Christmas would have been bleak without her skill and dedication, and it foretold her ability to provide for us. We were never hungry, and she made sure we got an education. She taught us faith in God and faith in our own abilities. That faith sustains me still.

Looking back, my mother’s determination and perseverance changed the harsh reality of that time, transforming our poverty into a memorable Christmas filled with delight. And as it turned out, the craftsmanship in those toys predicted her later accomplishments as an artist and sculptor.

Sixty-three winters have come and gone since that special holiday – that doubtful Christmas. I’m quite sure, in fact I have no doubts, that I’ve never had a happier one. 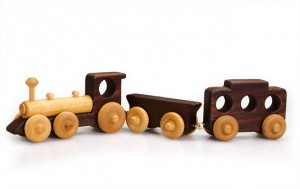 story can be found at thinthreads.com

Latest posts by kstoley (see all)